Mussoorie – Beyond the Mall Road

Traveling is not about visiting new places, but to have new eyes. If you were traveling to Musoorrie the first time, without proper research one might end up traversing just the old dilapidated, noisy, and crowded mall road; have a refreshing dip in the cold but shaggy and congested kempty fall, eat maggi and Momos at the nearby shops, take a view of the Doon valley at the library chowk, and would return to your hotel thinking that’s all Mussoorie had to offer.

I also ended up thinking and doing the same during my first visit. But there are myriads of other places and things that are hidden in the upper portion of Mussoorie known as -Landour, where one gets a true sense of coming into the lap of Mother Nature.

Landour is a 4 km walk from the mall road through some steep roads- lined up with shops-that sell vegetables, groceries, and electronics, and as you move upwards there are some old shops selling antiques and handicrafts. Landour being a cantonment area, no construction is allowed, and that has left the place quiet and unadulterated. People live in small homes scrunched up against each other, working hard to make ends meet. The life is tough for the average Garhwali in the hills. The income is scarce in winters, and it’s difficult to feed the entire family on savings from the summers season when the hill station gets most of its visitors.I guess they get their sobriety from living amongst the magnificent mountains of the Garhwal Himalayas .The bakeries are run by Muslims, tailors are Sikhs, cobblers belong to the lower class, and the rest have thier own hotels and cafes run and managed within the family.

Kids also toil hard to reach school from Sister’s bazaar to the clock tower- a tough walk of about 5 km. But they seem happy and buoyant. When I ask one of them what he plans to become in the future, he promptly responds with a shy smile-“Musician sir, I want to be a musician”. I wonder what answer a small kid living in the plains would have for this question. – Engineer, or a doctor maybe.

But coming back to places beyond the mall road to visit the next time you are in Mussoorie. The first one is Lal tibba in Landour. It’s the highest point of Landour where on a clear day one could see the white Himalayas protrude in a straight line beyond the hills. The place harbors serenity and calm one could never find near the mall road. The Deodars and oaks grow in abundance and make it difficult for the sunlight to penetrate. The result is a quiet and placid atmosphere conducive for artists and writers, like- Ruskin bond, who lives nearby in a beautiful house overlooking the valley. Tom Alter-a renowned theater personality who passed away recently, also had his home in Landour.

After relaxing at Lal tibba one can have a delightful lunch at Char Dukan at Anil’s cafe. Try out their grilled toasts and bun omelet. You will find pictures of Sachin Tendulkar, Dhoni, and hordes of other celebrities who have dined at this place multiple times. Sachin apparently also owns a quaint little cottage in Landour that and visits ever year in summer. 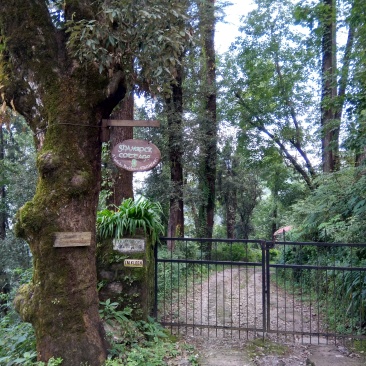 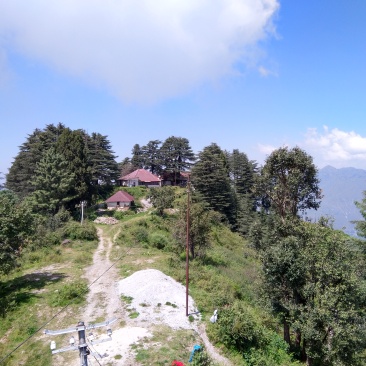 An old cottage at the edge of a cliff at Lal tibba overlooking the valley and the Himalayas. 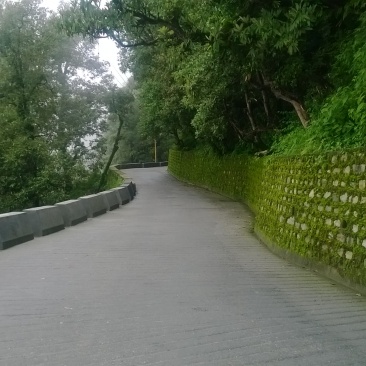 The sumptuous meal might make you drowsy, and the ideal thing to do is move forward towards sisters bazaar before you fall asleep on the table. It’s a tranquil place with only a handful of people who have their own shops- a small community of locals who love their surrounding, and are striving to maintain the quiet and charm of the place which faces a threat from the burgeoning tourist inflow. Prakash and sons is the oldest (1928) and famous- that sells everything you could find in a big Supermarket.

But people come to Sisters bazaar for the Homemade Jams, chutneys, and cheese. Prakash and sons offer a delectable spread of mango, plum, blueberry, and orange marmalade which are 100% natural, and without any preservatives, made from locally grown fruits. Prakash- the owner, after learning the technique of producing great quality cheese at Switzerland returned back to replicate the same; and the home-made Cheddar, Feta, and Gouda cheese are in high demand throughout Northern India. The shop is currently managed by his daughter who finished the course of Interior designing in Delhi and now finds immense joy in running the shop. She has an infectious energy and a charming demeanor about her which will compel you to try their home made stuff. Trust me – It’s worth every penny. A great bargain, for they serve you with genuine warmth and affection.

Prakash also runs a small niche cafe called Devdaar woods close to the shop which makes delicious Pizzas using the same home-made cheese. It’s a beautiful cafe with a huge Deodar tree standing in front. Do visit this hidden gem of Landour, you would love just sitting there doing nothing. Do not miss this one. It’s a rare experience. 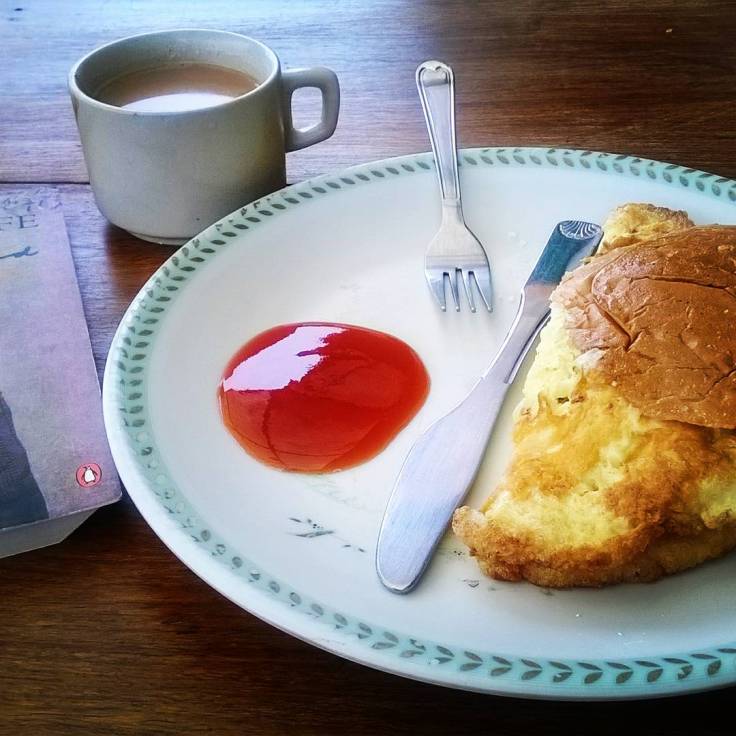 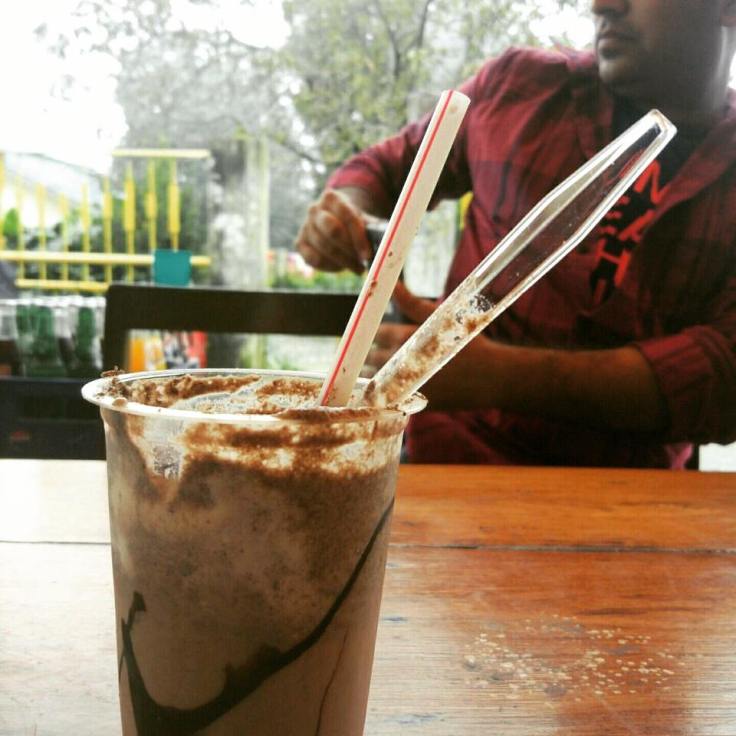 And how can one forget the old and popular “Lovely omelet” located in the heart of mall road. The place has been featured in numerous publications and travel shows like – Lonely planet, India Today, Trip advisor, Highway on my plate etc, and still maintains the same old deliciousness since it was started in 1918. It is currently managed by Khurshid Ahmed- a simple and humble little man, who with amazing dexterity turns a humble egg into fluffy and delectable omelets everyday from 8 am to 8 pm .It’s ironic to witness the rise of the yolk on the black tarnished pan as if the protein itself is on steroids. The taste is so good and demand is apparently so high in the summers that tourist don’t mind waiting 2 hours for their turn. The secret he tells me lies in putting a little turmeric before mixing the yolk, that takes away the usual smell, and that is another reason why the small kids also loves his hearty and crisp offerings, besides his amiable demeanor.

Mussoorie has plenty to offer for the plethora of travelers with different expectation and needs. All you need is an open mind and a pair of new eyes, every time you descend on the placid grounds of the queen of the hills- Mussoorie.

Do you have any story from your experience in Mussoorie? Comment below.

8 thoughts on “Mussoorie- Beyond the mall road.”