The Road to Munsiyari-  A bike trip in the Kumaon Himalayas.

Munsiyari is situated inside the  Johar valley(Uttarakhand) at a height of 7000 ft- a quaint little town which offers a magnificent view of the mighty Panchachuli Mountain-the last resting place of the Pandavas .Nestled in the secluded heartland of the Pithoragarh district near the Goriganga River, obscured by mighty Himalayan Peaks and deep outstretched valleys, it seems to rest on the aisle of a majestic open theatre overlooking the Panchachuli, Rajarambha and Hansling –all peaks above 20000 ft. It is steeped in mythology since the advent of the treta yug, when the epic war of Mahabharata took place. According to the legend the 5 Pandavas cooked their last meal  and rested for one last night on the Panchachuli Mountain before transcending towards heaven.

Munsiyari is approximately 600 km from Delhi. After boarding a bus at the Anand Vihar station one reaches Haldwani- a 300 km drive. Taxis are available for most parts of Kumaon from  here and the best way to move forward is to rent a taxi which will take you to Almora. From here buses are available in morning and one can also rent a private taxi as well.

We started our journey from Nainital- a 20 minute drive from Haldwani. After renting our bike-the Royal Enfield, and satiating our bellies with a hearty breakfast, we started out for Almora. It was 10 in the morning. The sun was shining bright, and a cool gentle breeze refreshed us from our tiredness of the long bus journey the previous night.

Our next stop was kainchi dham-a beautiful, white ashram built in the memory of the renowned mystic yogi- Shree Neem Kiroli Baba. Nestled near a small stream under the shadow of dense oak and pine forest – the ashram is a serene, quiet space, shielded from the noise and hustle of Nainital. It’s an ideal place to take refreshment and an insight into the mind of this divine being who had traversed the holy grounds of Uttarakhand in the early 1970’s.

The walls are decorated with Babaji’s pictures and emblems. Apparently Steve Jobs came to India in 1974 in search of Neem Kiroli Baba to attain spiritual enlightenment, but Babaji had already left his physical body the previous year.  Each year, during the famous June 15th bhandara, reportedly, more than one lakh (100,000) people descend here for Puja. It’s an extraordinary event where every pilgrim gets to be part of a grand feast which is served with great devotion and pride by people from the neighboring locals and towns of Kumaon.

After spending some time in the temple and having a small lunch of the cool and spicy Pahadi raita we marched ahead towards our next stop- Chaukori. The journey from Nainital to Chaukori passing through Almora via Sheraghat, Bageshwar, and berinag is a delightful blessing of Mother Nature. The air hits your face with the cool scent of the birch, pine and deodars. The road is wide, dark and inviting. The flora and fauna of the Kumaon forests brings boundless Joy and content to the heart of countless city dwellers -whose eyes, lungs, and soul have become swollen from seeing just concrete establishments and inhaling smog and diesel fumes.

One major advantage of being close to Delhi and therefore the foothills of the Himalayas is that they rise almost abruptly after the dense jungles of Rudrapur. And after a 300 km drive to Nainital, the mighty white peaks of Chaukhamba and Nanda Devi become visible once you reach Almora. Just like that you are transported to the world that you had once imagined in stories and fairytales.. The white Himalayas protrude now and then after every narrow bend that comes after the town of Pangot. And if it’s a clear day the Kumaon Himalayas will welcome you with the most delectable views. One can’t help but feel extremely lucky and blessed to be able to witness this beauty at such close proximity. What a wonderful blessing it is to be born under the patronage and divinity of these Majestic Mountains!

The trip is a welcome change from the hardships, congestion and pollution- that is spread in galore all over in a city like Delhi. After a while all the comforts and amenities that a city has to offer ultimately starts to make one feel selfish, morose, and uncaring. Slogging and struggling to keep a mundane job -one gets into a rut trying to balance work, relationships, and freedom, along with one’s identity in this whirlpool of everyday routine. Ruskin bond puts it correctly- “Nothing in the city, but a sickness of soul.”

We halt at Chaukori after a delightful but slightly tiring bike ride. The KMVN guest house is an ideal place to spend the night as it offers the best views, comforts and food -at the best price. One big advantage with these government owned guest houses is that they are built at the best location the town has to offer- located mostly on the edge of the tallest cliff with the best views. The morning arrives with a picturesque sunrise, dew drenched leaves, and hot Aloo paranthas. The balcony opens to astounding views of the magnificent Nanda Devi and Panchachuli peaks.

After a quick breakfast of Puri bhaji, Tea and toasts, we start early in the morning and throttle our way towards Munsiyari. The valleys and road now start to get narrower and dangerous. The roads are well paved but steep and restricted. These are tightly winding roads traversing windswept passes at an altitude up to 9000 ft. If one is not careful the roads could prove dangerous and difficult to maneuver the vehicle, and challenging for the one with vertigo. The valley plunges down into a massive gorge 1000 feet deep. Above, one can see vultures and eagles reconnoitering the surrounding in search for the next casualty. The room for error is scarce in the hills and one needs to adapt and learn quickly as the terrain and conditions changes abruptly with height. If you are too fast in your approach- headache and nausea is inevitable, as the pressure increases and temperature plummets almost exponentially.

But the path is laid out with the best of the ingredients. The Mahakali River flows parallel in full might for most part of the journey, and the pine trees give way to deodar, oak and birch. But it’s not till berthi fall that you get a sense of coming far out in the wilderness- away from the clutches of civilization. The silence is clearly audible, for there is no noise to distract one’s senses- if one is wise enough to shut up and listen. 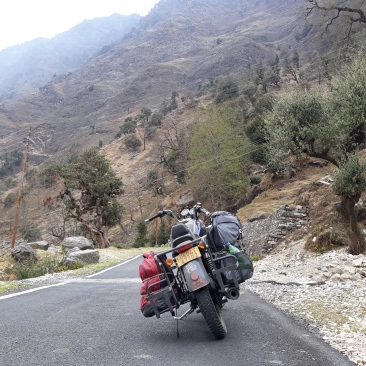 After leaving the small town of Thal, there is a strange magnetism and energy in the surroundings that is hard to comprehend.The ambience feels spooky and alienated from the natural world, and it seems like with every step you are slowly getting pulled into the realm of the supernatural.

It grows stronger as you move further ahead, and bears a strange and surreal attraction on the consciousness throughout the journey. You are aware of some soft whispers in the air that manifests into a palpable sense of adventure and mystery. It plays on your mind- gently engulfing you in a stupor. This all may be just conjured up imaginations of my mind but one would be a fool to deny the presence some sublime energy in the atmosphere that pokes fun at your idea of existence. It’s difficult to express and can’t be articulated in words. You need to take a ride on your own to experience this extraordinary ambience.

The Panchachuli remains hidden till the advent of Kalamuni temple. But the moment you reach the temple it bares itself in its full glory. The peaks were hidden under a dense patch of black clouds when we reached the temple gates. But just after 10 minutes of praying and cursing- all the five peaks revealed themselves in the evening sunlight- as if performing an erotic spiritual striptease to appease the setting Sun. The temple offers a jaw dropping view of the Panchachuli Mountain which some say is grander than the one you get from Munsiyari. The Panchachuli never leaves your sight from here and it is an omnipresent companion for the remaining part of the journey till Munsiyari. Kalamuni to Munsiyari is about 10 km and offers a breathtaking view of the entire Himalayan panorama till the very end. 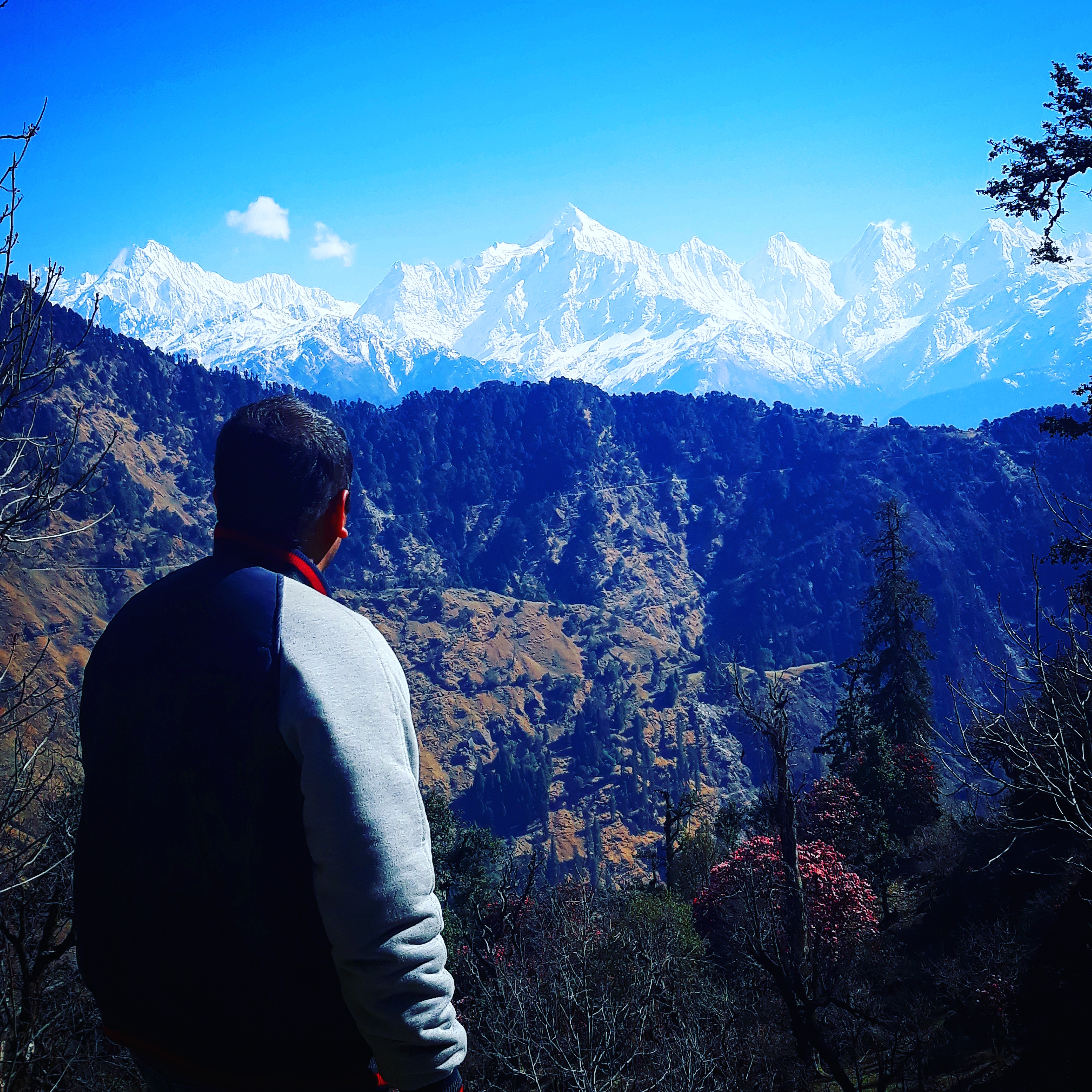 I had taken this trip in March.The weather was cool, placid and soothing.The rhododendron(Buransh) was in full bloom throughout the hills.The journey was a soul stirring experience. I was in a bad situation at that time- there were a lot of personal problems I needed to wrap my mind around. Both personal and professional life had gone for a toss and the trepidation was growing everyday in the bland, mundane, and stressful environment around office. This trip started like a distraction but turned into an unforgettable experience that elevated my consciousness and perceptions into a whole new dimension and helped me accept life as it is, not the way I would like it to be, because the way it unravels everyday- the way it unfolds, situation it presents, the space and people it contains- are all chosen by me, and If I don’t like them or would like to change them- I am the only one who is responsible to take actions.

“In the end we all get one life, and also- a life we ask for.You are restricted only by the walls you create yourself.”

And what about you? Do you have any story of a journey on a two wheeler? Comment below , I would love to hear it.

“If you think adventure is dangerous, try routine, it’s lethal”

6 thoughts on “The Road to Munsiyari”